Angeles City, Pampanga, is just 83 kilometers north of Manila. You can reach this city from Metro Manila in less than 2 hours via the NLEX. In case you still want your job in Metro Manila and your residence at the Metrogate, your daily commute to and from work (whether by private or public transport) will be a total reprieve. The roads leading to your new home are well-paved while you still enjoy the terrific sceneries along the way. Whether you go north or south, there are several arterial roads with moderate traffic any time of the year; you will surely enjoy a smooth trip anywhere you want to go. Moreover, if you travel frequently inside or outside of the country, you don’t need to go to Manila just to catch your flight. The Clark International Airport (CIA) is just a 15-minute drive from Metrogate. CIA is the country’s second busiest airport that offers international and domestic flights every day to various locations around the globe. You can book your flight online and up you go to the airport in no time. No need to hurry.

Interestingly, if you want your children to have an educational attainment at par with schools in Metro Manila, they don’t need to go to the capital. There are several high-caliber schools that offer numerous courses around the vicinity of Metrogate Angeles. Some of these schools are the Angeles University Foundation, Holy Angel University, Angeles City Science High School, University of the Philippines Diliman Extension Program in Pampanga, Asian Institute of Science & Technology, Philippine Women’s University Pampanga, St. Augustine School of Nursing, STI College Angeles, AIE College, AMA Computer University Angeles City, and the J&K International College, among more than dozens of private and public schools.

The Metrogate Angeles has its own country club with a golf driving range. Aside from this attraction, you will find the subdivision to be near other leisure and commercial centers in Angeles City. Some of the nearest shopping centers include SM City Clark, Nepo Mall, MarQuee Mall, Angeles City Public Market, Robinsons Place Angeles, and SM City Dau. While the nearest leisure centers from the Metrogate include the Mimosa Golf Course, Dinosaur Island Angeles, Nayong Pilipino Clark, and the Angeles Sports & Country Club.

There are also several restaurants in Angeles City that contribute to the rapid growth of the city’s economy. Most of these restaurants (such as Binalot, K Cafe, Downtown Cafe, Dainty, Ala Creme, and Gustav, among others) offer unique Kapampangan cuisine and are usually located inside the malls. These restaurants have a combined sales of almost Php1 billion for the 2017-2018 (September) period alone. This only shows that Angeles City’s economy is alive and kicking. You can easily make your move to have a pie of the economy by engaging in the city’s booming businesses once you are residing at the Metrogate Angeles. 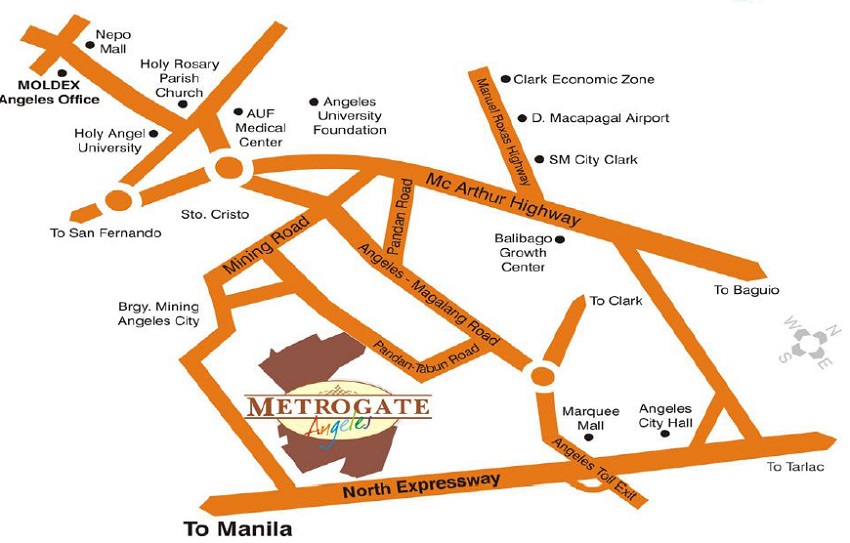